Deprecated: The each() function is deprecated. This message will be suppressed on further calls in /home/customer/www/trailville.com/public_html/w/includes/MagicWordArray.php on line 197
 IL Lake County Zion Beulah Park Trails - Trailville 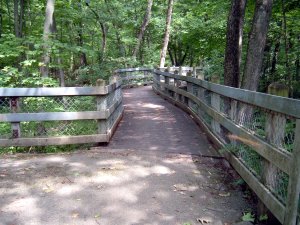 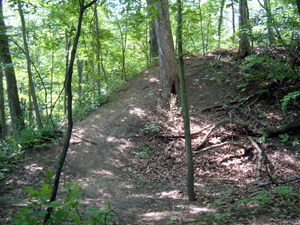 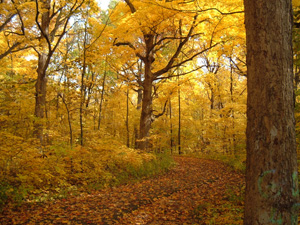 Heavily wooded city park running along a ravine and small creek with a section of paved bike path and about 5 miles of single-track trails frequented by local mountain bikers and BMXers.

At about a half mile by a quarter mile in size, Beulah Park in Zion, Illinois would seem like a typical city park. But hidden within the woods (most of the park is wooded) is a web of trails running through the ravine (Kellogg Ravine) along a small creek (Kellogg Creek). For decades these trails have sort of been adopted (and in some cases created) by local mountain bikers and BMXers drawn to this park by the terrain of the ravine. In 2013, the mountain bike trails in Beulah Park became "official" and are now managed by CAMBr (Chicago Area Mountain Bikers). 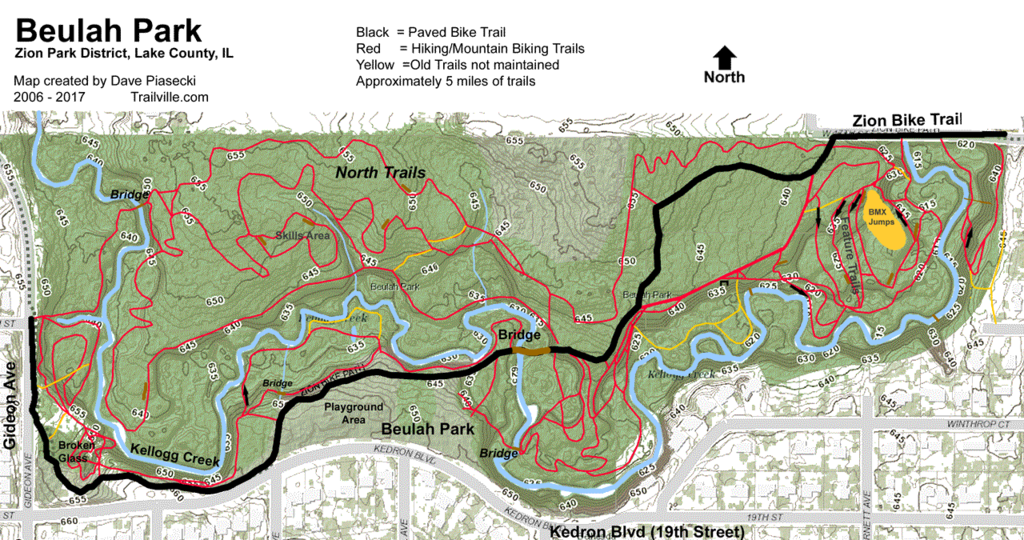 There are some trail markers at Beulah now, but since I've been riding Beulah for many years I've yet to test the trail markers to see if they are enough for a new rider coming to the system. There are a whole lot of intersections at Beulah and I don't think there is a marker at each one. While my map should help to give you a general idea of the trails, this is one of those systems that you just need to spend some time on to get a feel for it. It's a very small piece of land and the creek is always nearby to help with navigation, so you probably won't get lost.

The asphalt paved bike path running through the center of the park (shown in Black on the map) provides access to all trails. There's a bridge (see photo at top of page) that crosses the ravine in the middle of the park. On the east end of the bridge there are trails heading off either side of the paved bike path that provide access to the two largest groups of trails.

The group of trails north of the bike path and creek' are XC trails consisting of some tight twisty trail through the wooded areas away from the creek, and fun rolling slightly more technical trail along the creek. You can take any one of these trails to connect from the area near the main bridge in the center of the park, to the new small bridge at the northwest end of this area that connects to the west trails on the other side of the creek. Alternately, you can turn all of the north trails into a single big zig-zag trail by going east to west on one, back east on the another, and back west on the third. There are some features (mainly skinnies) along the inland trails, if you like riding the log skinnies, you'll want to ride the middle trail east to west, and the river trail west to east, that will set you up properly for the directions of the log skinnies. There's also a small "Skills Area" off of the middle trail, you'll see it in the "features and fun bits" video on this page.The inland trails in this area tend to stay muddy much longer than the trails on the south side of the park, so early spring riding is unlikely in this area.

The trails south of the bike path and north of the creek have a little bit of everything. There are numerous short but steep hills here and various bumps, jumps, drops, tree hops and log skinnies. This is a great place to start because there are quite a few trails, a lot of nice technical stuff, and it's pretty hard to get lost in here as the trails frequently run back to the paved bike path. Because of all the little bumps, jumps, and hills in this area, you'll find you will want to run certain sections multiple times, which is very easy to do given all the little connectors.

It's important to note that since people have been building jumps here for many years, it's not unusual for a small jump to suddenly appear on the trail or an existing jump to suddenly be bigger and/or steeper than it was previously. Some are to the side, but some are right in the middle of the trail and they're not always easy to see at speed. They can be fun if you know they're there, but keep your eyes open or you may find them the hard way.

I've added some arrows to the map to show sections of trail that are pretty much designed as directional downhill runs with at least some type of feature on them. I don't think there will be enforcement of any directional trails out here, but it doesn't make much sense to ride these sections the other direction and you may be encountering riders coming pretty fast off of features (drops and jumps).

There is a BMX Jump Area near the feature trails at the East end of the park. There had been a rough set of jumps here for years, but in 2015/2016 this area has been completely rebuilt. This isn't a large area, but these are some serious jumps.

The trails at the far eastern portion of the park can be accessed from the paved bike path along the road. This area was a mess for a while, but there is now a small continuous loop through this here. Take the high trail in (look for a short steep uphill trail coming off the paved path), ride it along the top of the ravine, then take the downhill and ride the low trail back to the paved path. There is a little drop off the side of the downhill section here.

The trails west of the creek (at the far west end of the park) also have some fun sections. This group of trails links to the trails on the north side of the creek via a newly built bridge and connects with the paved path in several places. Be aware the new trail at the far southwest corner of the park goes over what seems to be a dump from decades ago. There are significant amounts of broken glass mixed in with the dirt here. Time will tell if a hardpacked surface will be able to contain the glass or not. Actually there's broken glass throughout the trail system, but this particular area is far worse than other areas. I personally have never flatted at Beulah (and I ride here a lot) but I may just have been lucky so far.

There is another fun group of trails south of the creek and north of the bike path that is very easy to follow and provides several options for passing through this area. We recently added a connector between this little section and the west trails as well as another connector to the main bridge so you no longer need to ride the asphalt path to connect these. In fact, you can now ride a big loop around the main portions of the park completely on singletrack except the main bridge and one place where you'll cross the paved path.

In case it wasn't obvious, I have been describing these trails as mountain bike trails. Overall this is a real nice trail system for area mountain bikers looking for singletrack and features to ride. There aren't a lot of miles here, but these are quality mountain bike trails. Though I describe some of the trails as "technical" they are more of what I would call "fun technical" rather than "scary technical" though there are some more advanced features here. The video on the right labelled as "Features and Fun Bits" shows the variety of features at Beulah Park. If you like Log Skinnies, you will like Beulah because there are a lot of them, there are also quite a few small jumps on the singletrack, and if you're into getting bigger air, there is the BMX dirtjump area.

Oh sure, you can hike here too. This is a small park so any of the trails are easily hiked. As you can see by the photo on this page, the fall color in Beulah park can be rather spectacular. The new bridge across the creek at Northwest end of the park makes it easy to make a big hiking loop around the park roughly following the creek. If you're hiking Beulah park, you may want to note the small trail sections on the map that show arrows on them. These are all downhill mountain biking trails with jumps or other features on them so you should be aware these are areas where you may encounter mountain bikes moving very fast and possibly airborne. 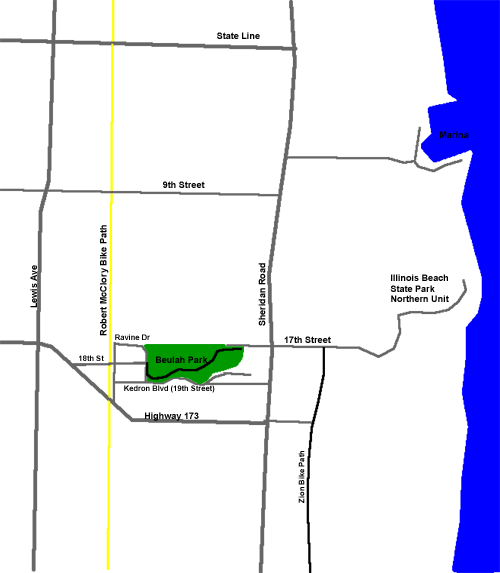 The map on the right shows the location of Beulah Park. There are several bike trails running through Zion that come close to the park. The Robert McClory Bike Path (also known as the North Shore Trail), shown Yellow on the overview map, is a rails-to-trails conversion that runs just west of the park. 18th Street crosses the bike path and runs right to the start of the paved trail through the park. There are also short connectors from the bike path to Ravine Drive and Kedron Blvd. The Zion Bike Path, shown Black on the overview map, runs north/south and ends at 17th street. You can take 17th Street west directly to the east end of the paved bike path running through the park. Further east on 17th Street is the Northern Unit of Illinois Beach State Park. There are a series of bike paths running through this area as well. See the Illinois Beach State Park Page for maps and additional information.