Update: It looks like they are calling this park KD Park at least for now. The park is now open and you can get additional information at http://co.kenosha.wi.us/index.aspx?NID=633 . The updated plans for the park are avialable at http://www.kenoshacounty.org/DocumentCenter/Home/View/582 I will eventually put together an updated page on the park.

The information below from 2008 is now outdated since a significant amount of work has been done to the park.

I put this page together to provide information on the new Kenosha County Park located in Randall on County Road KD (west side of KD) a little over a mile south of Highway 50. According to articles in the Kenosha News, the property is 234 acres and contains a small 39-acre man-made lake (more of a big pond than a lake). I believe the property was originally a gravel pit, but nature has done a nice job of reclaiming the land (see photo below). 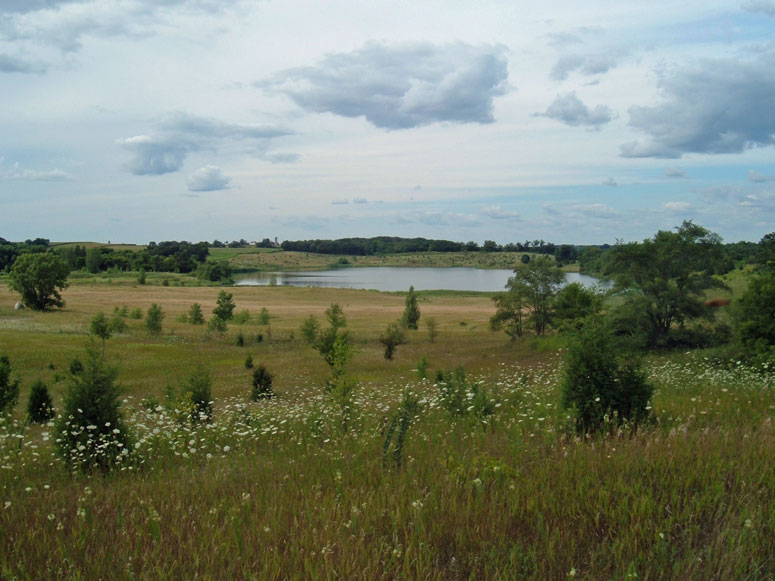 The photo above was taken from the southeast portion of the property looking north towards the lake. The property has some nice rolling terrain with open grasslands, wooded areas, and wetlands (the photo doesn't do justice to the rolling terrain). A low-resolution image of the proposed plans for the park is included below, but you can download a higher resolution pdf file by clicking on the following link: 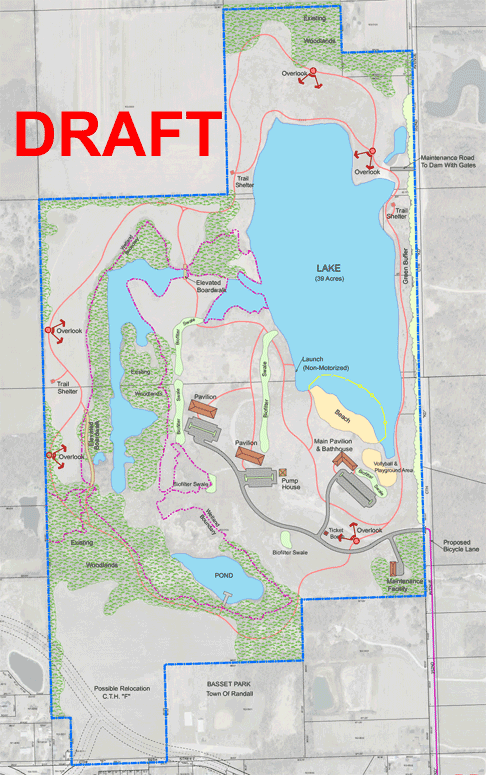 The plans show a small beach area along with some park roads, parking areas, and picnic areas located south and southwest of the lake. It also shows some trails running the perimeter of the park. It's important to note that these are the current (summer 2008) proposed plans for the park (provided by the Kenosha County Parks Department), but changes are possible. The parks department is interested in input from Kenosha County residents, so if you have specific interests or concerns, feel free to contact the Kenosha County Parks Department.

I don't have any detailed information on the proposed trails themselves, other than the locations shown on the map. The concerns I voiced were related to taking advantage of the existing terrain, and maintaining natural trail surfaces. There is some nice rolling terrain here, and I would hate to see them make trails that essentially avoid the terrain. I would also prefer not to see a bunch of wide crushed-stone or paved trails (though there could be some). My preference for hiking or mountain bike trails would be narrow, natural surfaced trails that take advantage of the terrain available. I think the rolling terrain also offers some potential for a nice cross-country ski trail system (which would have to be wider trails.). I guess if it were up to me, I would go with a main trail system consisting of wider natural-surfaced trail that could be use for skiing, walking, or biking, but have optional side trails that were more rugged, narrow, natural-surfaced trails that could be used by hikers and mountain bikers looking for a more interesting trail experience.

Anyway, now is the time to get involved if you have interests. Also, they may be looking for volunteers to help in constructing or maintaining the trails, so let them know if you are interested. If anyone has additional information on this property, the proposed plans, or updates on progress on the site or need for volunteers, please fell free to post on the Discussion Page. It would be nice the Kenosha County provided updated info on their site, but government sites aren't typically known for being "current".

As a side note, this property is right across the street from the New Munster Marsh Wildlife Area which also has trails (though they are rather informal trails).