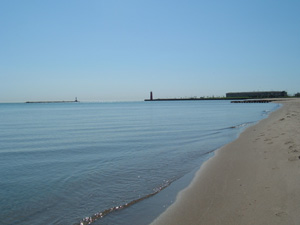 A paved bike path running through a series of lakefront parks, five beaches (plus one more just south in Pleasant Prairie), two lighthouses, a harbor, a marina, and the Pike River makes the Kenosha Lakefront a pretty nice place for outdoor (although rather urban) recreation.

The map on the right is a low resolution overview map of the entire Kenosha (and part of Pleasant Prairie) lakefront. The screen version is difficult to read, but you can download a higher resolution PDF version that you can pan and zoom in by clicking the following link: High Resolution Map of Kenosha Lakefront. This map represents a North-to-South distance of about 8 or 9 miles.

Below is an image of an enlarged portion of the main map. This map more clearly shows the lakefront bike path as it goes from Eichelman park through the harbor area and Simmons, Kennedy, Pennoyer, and Alford parks. It also shows how you can connect to the northern section of the North Shore Bike Trail and the paved connector trail that goes to Petrifying Springs County Park. 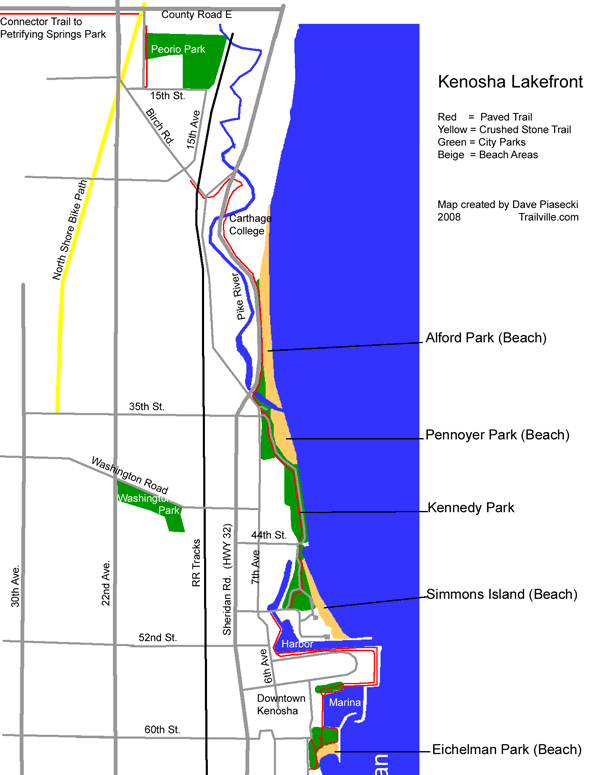 The asphalt paved lakefront trails provide some nice city park bicycling or skating opportunities. For the most part, the trail is rather easy to follow but it is a little tricky near the harbor. To get from the trail on the south side of the main harbor to the trail in Simmons Island (not really an island any more) you can either use 6th Avenue to the 50th Street Bridge or you can follow the concrete walkway along the west side of the harbor to the stairs that bring you up to the 50th Street Bridge (this second option is represented by the red line on the map). Just south of the main harbor, the trail goes around HarborPark (a new residential and commercial development). You'll notice two parallel red lines on my map; the inside red line represents the asphalt paved bike path while the outside red line represents the concrete walkway. It use to be that you could bike or skate either, but the kenosha area seems to have a small group of whiners that constantly write the local newspaper complaining about the most trivial things. Well these whiners complained about how "dangerous" it was with cyclists and skaters using the same trail as walkers (I'm assuming the whiners are the walkers) so there are now signs pointing cyclists and skaters to use the inside (asphalt) trail. I'm ranting a little here because I've been riding, skating, running, and walking the lakefront trails for years, and, with the exception of times with special events are going on, these trails just don't get enough traffic to require separate trail use designations. These are the same people that regularly write the Kenosha News complaining about loose dogs on trails (again, I use these trails more than most and it just ain't a problem), wet trails (yes, someone actually complained that the crushed-stone bike trails in kenosha were too wet after it rained), cyclists not obeying traffic laws, bla bla bla. Oh, and while I'm at it, what about those folks that build their new house in a new subdivision right next to a farm, then write letters to the paper complaining about smell and dust from the farm? Ok, I'm done.

The trail continues south along the marina and through Eichelman Park. The trail essentially ends at 3rd Avenue, but you can use 3rd Avenue to continue south to Southport Park where there is another small section of trail. From Southport park you can optionally continue south by using 7th Avenue (there is a bike lane on the east side) to 85th Street to Lakeshore Drive. You will ride by some sections of Chiwaukee Prairie State Natural Area along this route.

The main section of trail that runs from Eichelman Park all the way north past Alford Park to the end of the paved trail is approximately 5 miles.

For skaters, the lakefront trails are pretty easy. There is a tricky spot heading north just south of Kennedy Park as you pass the small boat harbor. There is a hill with a drainage dip at the bottom. This dip in the trail sometimes has sand or gravel in it that can be an obstacle to skaters. The other tricky part is the stairs connecting the trail by the harbor to the 50th Street Bridge though you can optionally take the sidewalk along 6th Avenue.

For cyclist, the lakefront trail has recently been extended north and west to cross Sheridan Road and bring you within blocks of the North Shore Bike Trail (Yellow on the map) which can take you north into Racine (see Kenosha Area Bike Paths for an overview) or to a paved connector trail that goes west to Petrifying Springs County Park.

At the south end, you have various road options to connect to the south portion of the North Shore Bike Trail or you can ride a mile or so on Sheridan Road (from 116th Street) and then head East to connect with more trails in Illinois Beach State Park.

Obviously, you can use any of the bike trails previously described for walking the lakefront. In addition, I've always considered beaches to be natural hiking trails and the close proximity of Simmons, Pennoyer, and Alford Park beaches to each other lends itself for some nice shoreline hiking. The Pike River splits Pennoyer and Alford Park beaches but you can take a short detour to the bike path to cross the river or, if you don't mind getting your feet wet, you can walk across the mouth of the river if the current is slow enough (most of the time in the summer it is slow). Sometimes the lake will even temporarily block the mouth of the river and you can walk across without getting wet. Be aware that when stronger currents are present in the Pike River, the mouth can be a drowning hazard.

The north end of Alford Park beach is rocky (actually washed up chunks of busted concrete used to protect the shore further north) while the south end and the other beaches are mostly sand. Alford Park beach is not really maintained by the parks department to the extent that the other beaches are and subsequently it accumulates a lot of debris (garbage) that washes up.

Just south of Southport Park is Kenosha Dunes. Though it runs along the lake, it doesn't really have a beach (depends on water conditions) but it does have some short hiking trails. Click the previous link for more details. You may also want to check out Chiwaukee Prairie State Natural Area.

Also see the "Winter" section on this page.

Can't really talk about beaches without mentioning swimming. There are no supervised Lake Michigan beaches in Kenosha, but you can swim at any of the beaches (at your own risk). Simmons Island Beach is the most popular for several reasons. It has a long naturally sand beach and a very gradual incline that makes it easy to pick your favorite depth (though you need to go out quite a way to get deep water). Eichelman is also popular with a sandy beach and a partially protected swim area. Unfortunately, the design of this beach sometimes lends itself to accumulating piles of algae/seaweed/debris when the south winds blow. The unnamed beach at the bottom of my map is sort of a roadside beach area. It is sandy and usually has a shoal slightly below the surface about 20 feet out so the water will get deep quickly then get shallow again before getting deep again. This changes based on wave action.

Southport Park has a small beach, which is usually gravel (smooth stone) at the shoreline but turns to sand out 10 or so feet. The water here gets deep moderately quick. There are some old concrete jetty's here that can be hazardous in rough windy conditions. Pennoyer park is a mix of sandy beach and smooth stone beach. The bottom drops out rather quickly here so it's nice if you like swimming in deep water. You need to be cautious near the mouth of the Pike River since depending on river current there can be some dangerous waters here (there have been drownings here). Alford Park beach is not that great for swimming; the lake likes to accumulate rocks, broken concrete, and other debris along the shore and in the water. I have cut my feet several times on who-knows-what here. This is especially true of the central and northern sections of this beach (it gets a little better at the south end).

Yes, Lake Michigan can be cold, especially in spring and early summer. Sustained East, Northeast, and Southeast winds will result in the warmest waters and also the largest waves. In June, you generally need these winds to get enough warmer water near shore to swim comfortably. You do need to be cautious especially with strong North, Northeast, or Southeast winds. The large waves created by these winds can also create strong currents running parallel to the shoreline. West winds (especially sustained strong west winds) will blow out the warmer surface water and bring up the cooooold water from below. Even in late summer you can sometimes be surprised by very cold water.

You can use the following links to check water temperatures.

The beaches are tested for pollution and signs on the beaches warn you of the conditions. I personally find this system flawed since a change in winds, waves, or rain can quickly change these conditions (much quicker than they can retest and change the signs) for better or worse. I swim Lake Michigan regularly regardless of any warnings, but that's me. I think the pollution warnings give the perception that Lake Michigan pollution is more dangerous than it really is. You need to make your own decisions. I do recommend not opening your eyes under water and showering as quickly as possible after swimming. Oh yeah, try not to swallow.

You can carry in a canoe or kayak at any of the beaches. A sea kayak is more appropriate, but since I don't own one I will canoe here occasionally. Canoeing on the great lakes generally requires catching the lake with very light winds (not the norm). The best conditions are generally early in the morning on days when the winds are expected to be light (and better out of the west than east). With the exception of the city parks along the lake, most of the Kenosha lakefront is developed residential property. There is a lot of motorized boat and personal watercraft activity on the lake during the summer, especially July and weekends. Boat traffic is worst near the main harbor, the marina, and another pair of marinas near the state line.

Though I do occasionally paddle the Kenosha lakefront, my preference is head another ten or so miles south and put in at Illinios Beach State Park where you have miles of undeveloped shoreline. You can click the previous link for more details.

The lake will sometimes (not always) produce some interesting ice and snow formations (see video on this page). Conditions can change very rapidly, so some the coolest ice/snow formations may only exist for a few days. If hiking the beaches in winter you need to be aware that sometimes what appears to be beach may actually be lake. And the icy formations created along the lake can be very dangerous. You could potentially slip from the ice formation into the lake or the ice you are standing on could break off.