Over the years the Kenosha area has accumulated a number of bike paths and they continue to expand. Though not nearly as exciting as a good hiking, mountain biking, or skiing trail, these mostly flat, family-ready, asphalt or crushed stone paved trails still account for quite a bit of my trail miles.

As you can see on the map, I've included trails in eastern Racine County and northeast Lake County (Illinois) in addition to the eastern Kenosha county trails. I did that because all the trails are within an easy bike ride of Kenosha and some of them can be connected to make some nice loops.

This page is kind of an overview of the area bike paths. There are other pages on this site that provide more details on certain trails (links are included on this page). You may also want to look at the map on the Kenosha Area Page to see how these trails relate to other trails listed on this site. 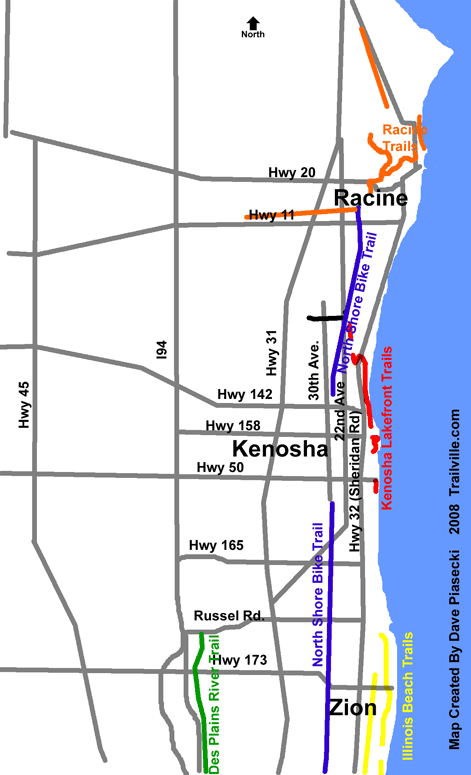 (shown Red on the map) are a series of asphalt bike paths through several lakefront parks in Kenosha. You can easily connect up all sections with a little time on some quiet streets. The longest section (officially known as the Pike Bike Trail, although I believe there is a sign on the North Shore Bike Trail that also says Pike Trail) starts at Simmons Island Park and runs north through Kennedy Park, Pennoyer Park, Alford Park and then along Carthage College and back through another section of Alford Park. A new section recently completed crosses Sheridan Road running through a small park then ending. From here you can take Birch Road directly to the North Shore Bike Trail or you can take Birch Road to 15th Ave to 15th Street to a short trail at the west end of Peorio Park that leads you to the North Shore Bike Trail. There is also a new (as of 2008) 1.75 mile asphalt connector trail (shown Black on the map) that runs along County Road E and connects the North Shore Bike Trail with Petrifying Springs County Park and UW Parkside.

Just south of the harbor, there is another section that runs around Harborpark and south through Eichelman Park. And another small section runs through Southport Park.

(shown Blue on the map)is a rails-to-trails conversion with a crushed stone surface that runs from Racine, Wisconsin all the way to Lake Bluff, Illinois (total trail may be about 30 miles but I'm not sure). It's a little confusing because the trail goes under a variety of names depending upon which section you are on. The names include The Kenosha County Bicycle Trail, Robert McClory Bike Path, Pike Trail, North Shore Trail, and Racine County Trail. I call it the North Shore Trail because that's what we called it back in the late 60's and early 70's when it was just a dirt path left over after they removed the North Shore Rail Line. So since they failed to give it an official name when they made it into a bike path, I'm going to keep calling it the North Shore Trail.

Unfortunately, there is about a 5-mile piece missing going through Kenosha. If you want to connect the main south section with the shorter north section, you need to take 30th avenue through Kenosha from 89th Street north to 35th Street where the trail picks up about 3 blocks east of 30th Avenue. This is the shortest route but far from the most pleasant as it runs though some industrial areas. Optionally, you could head east to the lakefront and take the Kenosha Lakefront Trails north and then head west to catch the northern section. This will probably add about 3 more miles to the route, but would make for a far more pleasant ride. The far north end of the trail in Racine brings you within blocks of the Root River Pathway (described under Racine Trails).

As with other rails-to-trails conversions this trail is flat and straight. Though there once was a time when much of this trail felt remote, that is quickly changing as subdivisions seem to sprout up like weeds along the length of this trail. That being said, there still are plenty of quiet sections on the north and south sides of Kenosha and in northern Lake County, Illinois. The section going though parts of Waukegan and North Chicago get particularly unpleasant since you need to cross several busy roads and a lot of not-so-busy ones as you pass through busy residential, commercial, and industrial areas.

If you live near this trail it's definitely a nice alternative to riding in traffic, however, I would be hard pressed to recommend anyone travel any distance just to visit this one.

The Racine bike trails (shown in Orange on the map) consist of several county bike trails, a pathway along the lakefront, and the Root River Pathway. The scenic Root River Pathway (the squiggly orange Y-shaped trail) winds it's way along the Root River going through a series of city parks. This trail is mostly asphalt and there are a few areas where you need to use city streets to get to other sections of the trail. There are signs, but you should take a map since Racine streets can be a bit confusing and missing just one sign can get you lost pretty quick. Also, I recall that one or two of the signs were a bit misleading in the direction their arrows pointed. They also have signs directing the connections between the Root River Pathway and the other County Bike Trails. Unlike other area bike paths, this trail winds and curves and even has some steep hills (could be a bit dangerous for newbie inline skaters). I like to use this trail to get from the North Shore Bike Trail to the Racine Lakefront (using the east fork of the trail), but the section going to the north-northwest is actually more scenic.

The section of Racine County Bike Trail on the north side of Racine heading north-northwest is a crushed stone trail that runs along a railroad right-of-way. It runs right by Cliffside Park, a scenic county park located on some bluffs overlooking Lake Michigan. The roads connecting the Root River Pathway this section of the Racine County Bike Trail takes you through some heavily industrial areas (not very pleasant).

The trail running West just north of Highway 11 is not yet complete and I'm not sure what the status of it is west of Highway 31. I believe this is called the Racine-Sturtevant Bike Trail. It currently consists of an asphalt trail that runs from the North Shore trail, west to Highway 31 (Green Bay Road). From Highway 31 where KFC sits on the corner, you have to take the road that leads behind the Sam's Club where you'll find the connecting trail to Sturtevant on the Southwest rear corner of the Sam's Club. As of 2009 there are no markings designating this trail. It is a gravel trail (not the finer crushed stone like the other Racine County Trails). The trail first goes into an area known as the "Cozy Acres Trails" where you will see some side trails. I believe this is public land, but I'm not sure. The trail then runs behind the CNH Manufacturing facility and ends at Willow Road (by SC Johnson). Because of the lack of trail markings, I'm not sure what the status of this trail is. They were doing some work on it a while back, but nothing seems to be happening recently (2009). It's possible they've done some work on sections further west, but I haven't been out there to check it out. Based on what I've read in some DNR reports, the plan is to extend this all the way to I94.

Perhaps the most enjoyable bike path for the casual cyclist is Racine's Lake Michigan Pathway, a beautiful five mile trail along the central Racine lakefront. The designated and paved pathway begins on the south end of Pershing Park and continues north to the Racine Harbor Park. From there the pathway continues north along the lake in front of the Radisson and the Chancery Restaurant (an excellent place for a cyclist to stop for refreshment) and winds around to the Root River where the trail continues across the Root River drawbridge. Once on the north side of the Root River, the trail bears to the right on Dodge street in front of the Chartroom and Sandpiper. An immediate right turn on Reichert Court north of the Chartroom leads the cyclist back to the paved portion of the trail at the edge of the lake. This wonderful section of asphalt was recently completed and it runs along North Beach and continues north past the Racine Zoo (I show this section on the map, but I don't show the road portions). You may encounter some signs along the other bike paths that reference the Lake Michigan Pathway.

The Des Plains River Trail is an amazing multi-use trail. It's currently about 28 miles long (this is continuous trail) and, unlike rails-to-trails, it is neither straight nor flat (though I wouldn't exactly call it hilly either). The trail starts just south of the Wisconsin state line in the Van Patten Woods Lake County Forest Preserve. Click Des Plains River Trail for more information.

This page is authored and maintained by Dave Piasecki and others