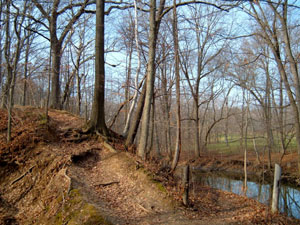 I suppose the classic definition of a "Hiking Trail" would be something like a narrow rugged trail used to walk (hike) through the wilderness. However, use of the term often covers a much broader range of trails including some trails that hardcore hikers would likely scoff at calling hiking trails. For the purposes of trails on this website, I'm going to accept the much broader definition of hiking trail to basically cover just about any outdoor trail passing through a natural environment where people choose to walk. So whether you are taking a short walk on a wooded trail in a city park, or a rugged hike along a ridge, or a multi-day backpacking trek, you're doing so on a hiking trail.

Some hiking trails are destination-based trails such as trails to waterfalls, lakes, or scenic overlooks, while others are journey-based trails that simply provide a route to pass through and enjoy natural areas without having a specific destination other than the trail itself (though there may be specific points of interest on the trail that may be considered destinations). Hiking trails range from small trails of less than a mile to trails thousands of miles long, and range in difficulty from well-maintained easy relatively flat footpaths to extremely rugged trails with very steep rocky, rooty, and slippery surfaces, water crossings, and a variety of other obstacles to deal with.

Types of Trails used for Hiking 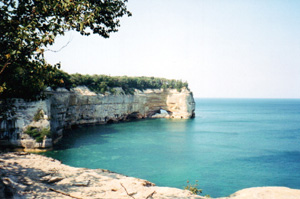 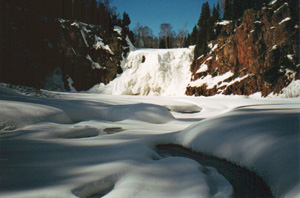 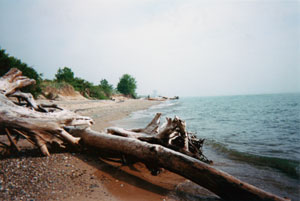 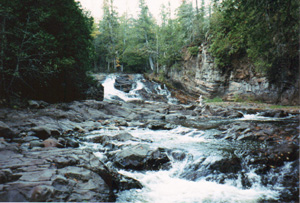 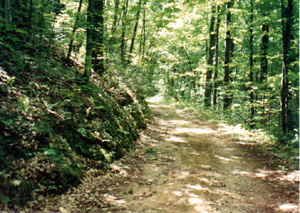 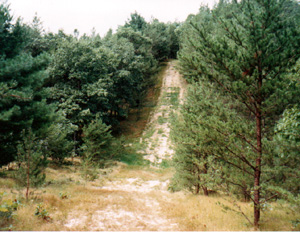 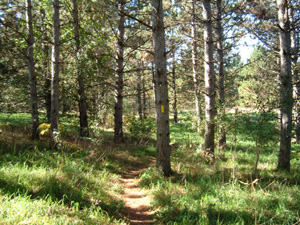 Trails are marked in many ways. Everything from classic old wooden signs with trail names and directional arrows carved into them to custom printed metal or plastic signs to various types of color-coded posts placed along the trail. But the closest thing to a standard way of marking trails is the use of blazes. Blazes are colored markings usually placed on trees along the trail. The ones I've encountered most were either rectangles (maybe 2 or 3 inches wide by 3 to 5 inches tall) or circles painted on the tree slightly above eye level. Painting on the bark of a tree is not all that precise so in many cases the blazes just look like a blotch of paint. For single standalone trails, the color blue seems to be used the most (that's just my experience), but additional colors (red, yellow, white, orange) may be used for additional trails in the same system or to uniquely identify a major trail. Thru-hiking trails will usually maintain the same color marking for the entire trail. For example, the Appalachian Trail is marked with white blazes, and the Ice Age Trail in Wisconsin (my neck of the woods) is marked with yellow blazes throughout its length (see photo on right). On well-defined trails that get a fair amount of use, most of the blazes probably seem unnecessary unless there is another trail intersecting with the trail, but if you've ever tried to follow a hiking trail after a foot of snow has fallen, you will quickly gain an appreciation for each and every blaze (see winter trails photo further down this page). The spacing of blazes along the trail is not standardized; ideally you would like to be able to see a blaze from any location on the trail, but that isn't always the case. There does tend to be a greater emphasis on placing blazes whenever the trail changes direction. Check out the wikipedia article Trail Blazing for additional information on blazes including the use of multiple blazes as directional markers (I have to say that I was unaware of this little system, I guess I will have to pay more attention on the trails to see if these are actually used). 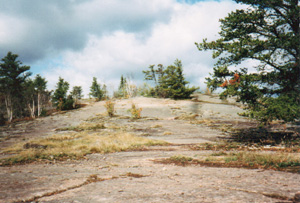 In open areas with no trees, cairns are sometimes used in place of blazes. Cairns are basically three or more rocks stacked in a manner that makes it obvious they were intentionally stacked (not just a natural pile of rocks). The ones I've encountered generally consisted of no more than five or ten rocks. In the northwoods of the upper great lakes region (where I spend much of my hiking time), we don't have a lot of need for cairns, but I have seen them used occasionally when a trail passes across a bald peak or ridgeline (photo on the right shows an example of the types of places I have seen cairns use, however there is no cairn in that photo). The problem with cairns is they need to be regularly restacked due to being knocked over by wind, rain, snow, hikers or animals. And, they are easy targets for mischievous morons. They also don't do much good after the snow falls. Check out the wikipedia article Cairn for additional information on cairns.

Since walking tends to be a little more stable than other trail activities such as skiing or mountain biking, the importance of difficulty ratings on hiking trails does not rank quite as high as for trails used for these other activities. Which may help to explain why difficulty ratings on hiking trails tend to be extremely subjective. The most annoying rating situation I run into frequently is when trails are rated as difficult simply because they are longer than the other trails. As if we couldn't figure out that hiking ten miles is going to be more difficult than hiking three miles. And then there are the regional differences. A trail designated as more difficult or most difficult in some of the vertically challenged areas of the great plains states may actually be easier than a trail designated as easy in the mountains. I've hit a few trails in Canada that had sections that were so difficult that they would be completely off the scales used for trails I frequent in the Midwest. In fact, if those same trails existed somewhere else, they may not even be considered trails at all and would likely have a big gate or fence across them prohibiting entry. The photo on the right shows a "hiking trail" through a talus field. You can see the blue blaze painted on one of the large rocks in the photo.

I think for most hikers, knowledge of the difficulty of the trail is not used so much to choose a trail, but rather to plan their hike (type of footwear, expected travel speeds, should they bring trekking poles?, etc.). Unfortunately, a basic difficulty rating doesn't provide the details for these decisions, so you are generally better off looking for more detailed information on the trails by talking to other trail users, park rangers, reading trail guides, reviewing topographic maps, and checking websites like this one. 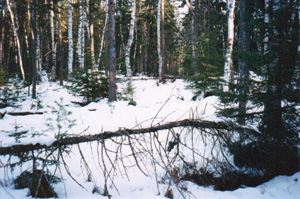 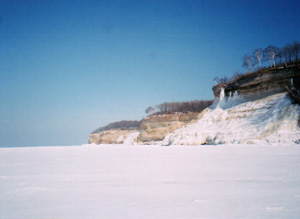 As snowshoeing has gained in popularity in recent years, I've started to see more and more trails designated as "snowshoe trails". I don't particularly like this designation because these are just hiking trails with snow on them and you may or may not need snowshoes to hike them. And in many cases, it's much easier to hike them without the snowshoes (I've seen my share of folks trudging around with their new snowshoes in four inches of snow or on hardpacked trails that could be easily hiked in a pair of sneakers). So I'm gonna just stick with calling them hiking trails regardless of whether or not there's snow on them.

And for those that have not hit a hiking trail in the winter, you would probably be surprised at how much foot traffic many hiking trails get after the snow falls. Hiking trails along rivers and waterfalls become particularly scenic in the winter (see photo near top of this page) and these types of trails often get so much traffic that even with a couple of feet of snow on the ground, you probably do not need snowshoes to hike them (unless you are the first one out after a heavy snowfall). However, going off trail to explore the ravine along the waterfalls is probably a whole different story and your snowshoes will come in real handy for that. Hiking popular trails in winter is pretty easy because you will have a very well-defined trail of footprints to follow, but hiking a less popular trail or being the first out on a trail after a significant snowfall can bring a whole new dimension to hiking. This is where those colored blazes on the trees become incredibly important, and even with them it is very very easy to lose the trail. In the photo on the right, you can see the blue blaze on a tree (barely) but can you see a trail? Neither could I. Because of this, you have to be very careful when planning your winter hiking routes. Doing an out-and-back is the best choice in an untracked trail because you can feel pretty comfortable about getting back by just following your own tracks (provided you're not hiking during a major snowstorm). But trying to connect several untracked trails into a loop can be rather risky. I have had to turn around on at least one occasion about two-thirds way around a loop because I completely lost the trail (making my hike a little longer than I had planned). Had I been a little further around the loop when I lost the trail, I may have tried something really stupid like thinking I could bushwhack my way back to the trailhead.

Winter hiking also opens up some temporary natural hiking trails such as frozen lakes and rivers that allow you to get to places you wouldn't be able to see in the summer (without a boat). The photo on the right shows how even a big lake like Lake Superior can sometimes become a hiking trail (though I was actually skiing that day).