This article is about the east/west section that goes only by the name "North Shore". For the north/south trail that is known by numerous names, including Robert McClory trail, North Shore trail, and Green Bay trail, see WI Kenosha Area Bike Paths. 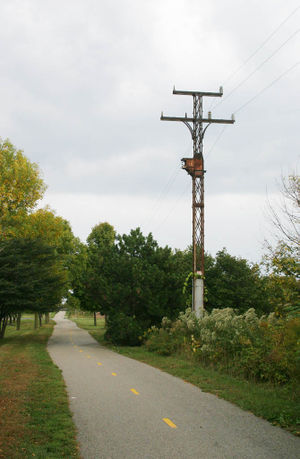 The paved section east of IL-43 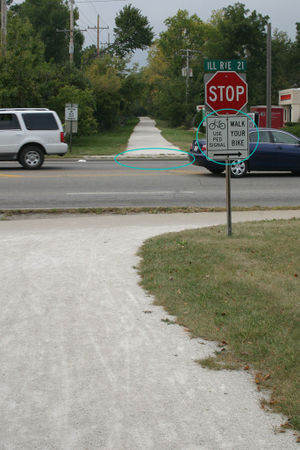 The North Shore Bike Trail is a partially paved 7.6 mile trail that runs along IL-176. On the east end, it merges into the north/south Robert McClory trail, next to Sheridan Rd in Lake Bluff, IL. On the west end, it dead-ends at Brice Ave in Mundelein, IL.

The trail becomes generally less enjoyable the further west one rides. The east end is paved for 1.6 miles, becoming crushed limestone at IL-43. From the east end to I-94, almost every major intersection is crossed via a bridge or tunnel. However, once in the Libertyville/Mundelein area, there are a number of busy roads that have to be biked across, and frequent stops are required. The IL-21 and Butterfield intersections are particularly busy... there are no ramps at curbs there, to try to get riders to take a detour and cross at the crosswalks.

Trail connections and other waypoints

At the east end, the trail merges into the Robert McClory trail. The Lake Bluff Metra station lies 400 feet north of here.

1.0 miles from the east end is a railroad crossing. The Skokie Valley Bikeway connects here.

At 1.6 miles from the east end is IL-43, which has the Lake Forest Bike Path running along its west edge, heading south.

At 2.0 miles from the east end, the Middlefork Savanna Forest Preserve Trail connects from the south.

At 3.2 miles, the trail passes Lamb's Farm and goes under the IL-94 tollroad.

At 3.5 miles, a spur towards the popular Old School Forest Preserve branches off to the south.

At 7.2 miles, a Libertyville Township bike path connects from the south. Although somewhat disconnected, several other subdivision bike paths are south of this, heading in the direction of the Buffalo Grove bike path complex.

At 7.6 miles, the North Shore trail dead-ends next to the Carmel High School. It's possible to ride 4.5 miles west along Hawley St. and connect to the Millennium Trail.

The Robert McClory path - North Shore path - Millennium trail connections are part of an optional route on the 500+ mile Grand Illinois Trail. The optional route will continue to be mentioned by ILDOT until the primary route through Elgin is completed.

This article was created by Interiot. The article is tri-licensed under the GFDL, CC-BY-SA, or whatever the current version of Trailville:Copyrights says (recipient can choose which to use).